After investigative journalists have revealed the severe short-comings of Maersk’s shipbreaking practices in Alang, India, the shipping giant blatantly disregards the findings. In an official statement, Maersk defends its new practice of breaking ships on Indian beaches with tooth and nail without even mentioning the grave concerns raised by the Danish journalists [1]. Maersk's strategy seems to be to draw a veil of silence on the bad conditions in Alang whilst trying to squirm themselves out of other scandalous revelations. These include the recent illegal export of their heavily contaminated floating oil production and storage tanker “North Sea Producer” from the UK to Bangladesh and the uncovering of Maersk’s secret contracts that incentivised business partners to sell chartered ships for scrap to the worst yards.

After many years of proudly recycling its end-of-life ships in modern ship recycling yards, Maersk now tries to make the world believe that truly sustainable ship recycling off the beach is not affordable. The world’s largest container ship owner comes forward with this misleading statement while its competitor Hapag Lloyd makes it very clear: the German container ship line stays true to its commitment to clean and safe ship recycling off the beach in EU-approved facilities. Also ship owners from other sectors have been doing very well with their uncompromising approach to ship recycling, including Wilhelmsen, Wallenius, Hoegh, Grieg, CSL and Royal Dutch Boskalis.

"Maersk’s cant on their competitiveness is ludicrous: whom do they want to fool when they say that the company would risk its existence if it continued to recycle ships in state-of-the-art facilities? If smaller shipping lines are able to do it, why not the world’s largest ship owner? It is a question of properly accounting for the true costs of recycling throughout the life-cycle of a ship. We expect Maersk to ensure sound financial planning and long-term investments rather than short-term profit maximisation at end-of-life."
Patrizia Heidegger - Executive Director - NGO Shipbreaking Platform

Maersk defends its U-turn from state-of-the-art facilities in China towards the beaches in India with the argument that it will assist the Alang yards to improve their standard. As a matter of fact, Maersk has not invested in any infrastructure in the Alang shipbreaking yards - they have even been warned that such investments might be a dead-end and too costly compared to using available docks or slip-ways. When asked, the company is consequently not able to put a number to its investments in Alang. All that Maersk has done is to write up a standard on paper and to employ staff in Alang to supervise its implementation. The Danwatch investigation has shown that Maersk’s yard, Shree Ram, is unable to live up to that standard and that Maersk’s presence at the yard has not helped to rectify the situation.

"Maersk keeps reeling off its narrative that shipbreaking is a significant employer in India. If workers in India are really their main concern, then why has Maersk not fixed the most basic things first: contracts for all workers, decent accommodation for all, adequate personal protective equipment – before putting its ships on the beach? How can they call shipbreaking ‘superior’ in an area that does not even have a hospital to treat severely injured workers? The truth is: it is all about profit over people."
Patrizia Heidegger - Executive Director - NGO Shipbreaking Platform 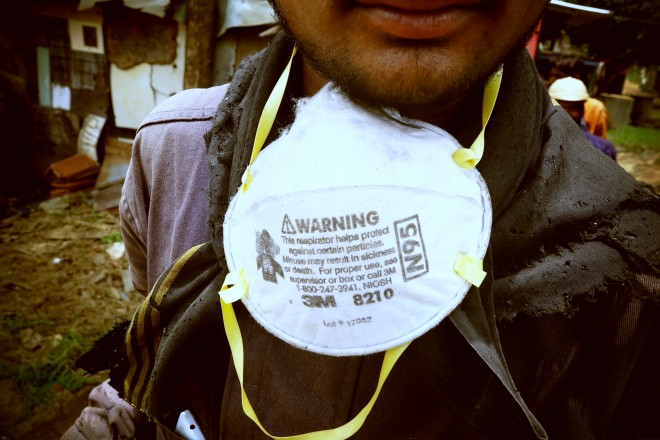 The NGO Shipbreaking Platform has been calling on Maersk to return to truly sustainable ship recycling and to invest in a model facility off the beach that is able to recycle its estimated 75-100 end-of-life ships under the high standards for environmental protection and occupational health and safety that have been deemed necessary under European law. Only then would Maersk be able to pride itself with supporting decent jobs in the ship recycling sector.

"The answer is not on the beaches of India, Bangladesh and Pakistan. The answer lies in innovation and engineering solutions for 21st century ship recycling: India might be ready, the beaches of Alang are not."
Patrizia Heidegger - Executive Director - NGO Shipbreaking Platform

- According to Maersk, its environmental recycling plan foresees that most of the vessel is dismantled without the ship parts being in contact with sand or water. The Platform and other critics have been arguing that the facilities lack large industrial cranes that can be deployed along the side of the ship. Cut sections therefore need to crash down onto the beach and the intertidal zone. During their research at Shree Ram, the journalists found cut sections that had been dropped into the intertidal zone, and were even cut down right on the sand. The claim of ‘no contact between cut parts and sand or water’ remains a myth. Apart from the negative environmental impact of the gravity method, Maersk does not at all address the scraping of toxic paints during the beaching process and the release of heavy metals, such as copper, into the environment.

- Maersk claims that appropriate protective equipment is available and mandatory to use. While the journalists have not checked whether PPEs are available, they have found that adequate protective equipment is simply not used. Workers welding and torch-cutting at Shree Ram were found wearing highly inflammable cotton T-shirt, inadequate or no respiratory protection, no goggles and no hearing protection. The investigations have found that the Maersk supervision on the ground is unable to ensure basic occupational health and safety measures.

- The journalists interviewed ten workers that are employed at Shree Ram. They workers have clearly identified that they work on the demolition of the Maersk Georgia and the Maersk Wyoming. None of them had a contract or any written document concerning their employment relationship. None of the men were aware of their rights. Maersk claims that all Shree Ram workers have contracts and has not been willing to respond to the findings.

- Maersk is aware of the fact that not all of Shree Ram workers are offered decent housing. The shipping giant has accepted this situation when selling the Maersk Wyoming and the Maersk Georgia without demanding basic infrastructure for workers as a precondition for doing business. Similarly, Maersk accepts the lack of a proper hospital at Alang where severe injuries could be treated.

There were a total of 170 ships broken in the third quarter of 2020. Of these, 110 ships were sold to the beaches of South Asia.

The NGO Shipbreaking Platform publishes today the eighth South Asia Quarterly Update, a briefing paper in which it informs about the shipbreaking industry in Bangladesh, India and… Read More

There were a total of 98 ships broken in the second quarter of 2020. Of these, 60 ships were sold to the beaches of South Asia, where shipbreaking kept putting workers’ lives at risk.

The NGO Shipbreaking Platform publishes today the eleventh South Asia Quarterly Update, a briefing paper in which it informs about the shipbreaking industry in Bangladesh, India and… Read More

Thirteen workers suffered an accident on South Asian beaches in the first quarter of 2022.